The Adventures of Mini Oli! 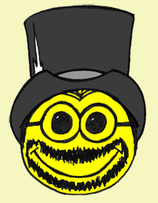 After consuming a strange, unknown liquid in times of thirst, Regular Oli became... Mini Oli! At a mere six inches tall, but still resplendent with beard and glasses, Mini Oli goes on to have many adventures only a figure such as he can have.

After surviving such things as falling in a toilet, zombies, alien worlds and heights, Mini Oli found himself suffering from Plastic Cancer. Thankfully, with the help of his new robot sidekick Robert and his trans-dimensional machine, he's back, and grouchier than ever...